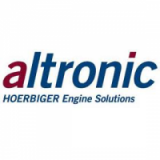 Hatraco is the Central European distributor for Altronic, offering sales, service and warranty handling. We are holding inventory for the most common ignition and fuel control products in our warehouse in Angerlo. For more details concerning the Altronic product program, check here.